So far the only customization option we discussed were abilities. However, there's a second option that we brushed before: The Bonus API objects.

Other articles in the modding API series:

As establihed previously, each Ability in the API is linked to an engine function where its behavior is defined. On the one hand this is a benefit because we know exactly what a unit can do when we give it the ability. On the other hand there could be an ingame situation where we want the ability to do something slightly different, an edge case so to speak.

On an implementation level, Ability and Bonus are quite similar. Every Bonus provides a link to behavior hardcoded in the engine. The key difference however, is the purpose they are used for:

So unlike abilities, which are usually always available to a unit, a bonus requires a condition to be fulfilled or a situation to occur. Then and only then do they have an impact on the game.

Taking the previous example about elevation the process for handling a bonus would roughly look like this: On execution of the Attack ability the engine checks if the units has any corresponding boni assigned. After that it checks whether the conditions of these boni apply. If they apply, the values in the engine function's calculation are modified accordingly. 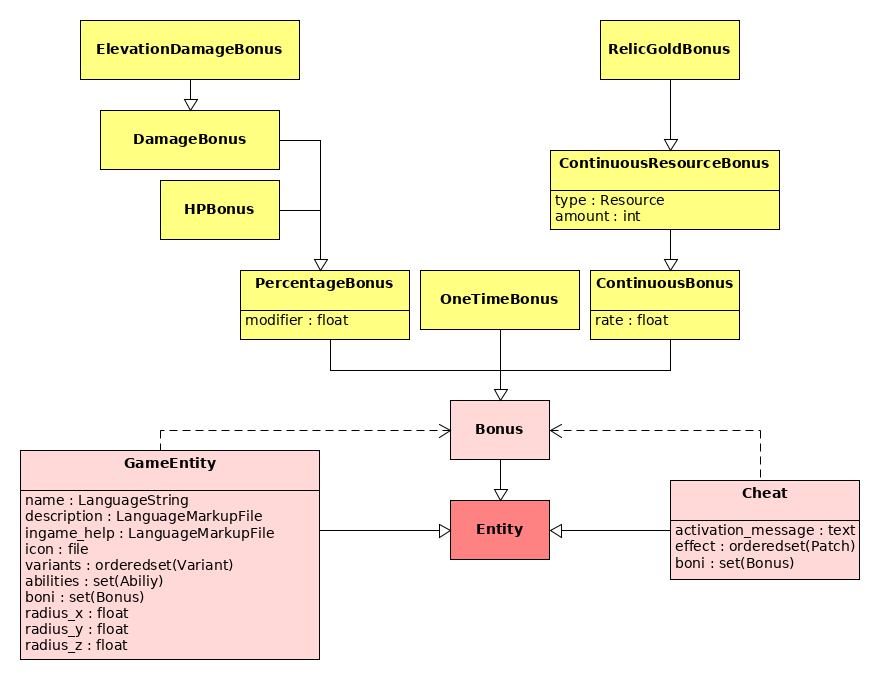 Each GameEntity can have an unlimited number of boni assigned in the boni member. Other objects, like Civilization or Cheat, are also allowed to store boni.

Until now we've only talked about boni in the context of (damage) modifiers. In practice, a bonus can do much more, e.g. a map reveal (cheats) or providing a flow of resources (relics). A Bonus object does not necessarily have to alter an ability. This versatility is a requirement to a certin degree as Bonus objects should be able to cover a lot of different edge cases by definition.

While AoE2 has some applications for boni, it really are its successors Age of Mythology and Rise of Nations who make them an integral part of the game. In AoM relics can provide very unique boni, ranging from cheaper upgrades to automatically producing units for the player at the temple. RoN offers the player boni for building wonders and harvesting unique resources. These mechanics could act as a blueprint on what boni will be implemented into the API by us over time.

It is important to note that Bonus is not the same as what the Age of Empires community colloquially refers to as attack bonus or civilization bonus. Most of these are not conditional and only change data. For these cases of application, nyan patching is suited much better.

We have established before that Bonus objects are conditional, but sometimes it might be beneficial when the mere presence of the bonus is condition enough for its application. This especially concerns boni that are percentage-based.

Consider a civilization that gives cavalry 10% more health in Feudal Age, 15% more in Castle Age and 20% more in Imperial Age. We could do this through patching, but it does not look nice.

Not only is this very unreadable, it's also prone to rounding errors. We can improve it, if we model it with a Bonus.

Much better to read for a human.

Next time we are going to investigate abilities again by taking a look at the Inventory ability.

Any more questions? Let us know and discuss those ideas by visiting our subreddit /r/openage!

As always, if you want to reach us directly in the dev chatroom: